COMPARE 0
You are here:Customers’ statements »
02.04.2009 | Biomass processing extends the range of services 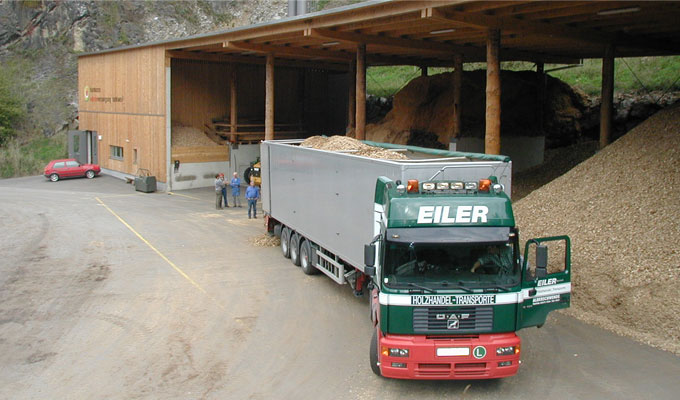 Alberschwende/Vorarlberg/Austria. Alberschwende is located in Vorarlberg, Austria's westernmost Federal state, in the Bregenz district south of Lake Constance. The region is also known as the Bregenz Forest. This is no wonder, because 40% of the region consists of forest. This makes paying more attention to timber as a raw material common sense.

Eiler GmbH has been doing this since 1959, when senior partner Erich Eiler founded a timber trading company. Thanks to his tireless dedication and the practical support provided by his wife, the company grew continuously and was reformed in Eiler GmbH in 1980. Erich Eiler managed the company as managing partner until retiring at the end of 1993. At the beginning of 1994, he handed management over his daughter Edith and Johann Manser. The two have been successfully managing the company since then. Timber transport, timber trade, woodchipping generation and winter services are included in the company's range of services, helped by more than 30 employees.  The company has 25 vehicles in its vehicle fleet, most of them HGVs.

One of these HGVs, fitted with a Mercedes-Benz V8 motor with 435 hp, has been towing a JENZ HEM 700 mobile chipper since 2001. This machine is being used daily for producing woodchippings for large heating installations. The combination of producing woodchippings and transporting them is extremely beneficiary for many Eiler customers. The trailers and containers used hold between 95 and 40 m³ of woodchippings and are quick to set down on the customer's premises. Since both these services can be provided by one company, efficient order handling is guaranteed. That is the reason that Eiler has made such a good name for itself in the Bregenz Forest region.

In the meantime, more and more private households are heating with woodchippings so that the demand for this natural material has increased dramatically. Edith and Johann Manser have therefore made the decision to invest.

The new JENZ BA 720 biomass processor has been working hard in the Bregenz Forest Since May 2009. "We have had a lot of good experiences with JENZ mobile chippers over many years, and we hope that the new machine will be working just as reliably" says Johann Manser. The BA 720 combines the benefits of a waste fragmentiser with those of a mobile chipper. It is effectively an "egg-laying all-in-one machine", a heavy-duty universal machine for fragmentisation of garden cuttings, organic waste, mature wood, standing timber and pre-fractured root wood.    The intake opening has been increased from 660 mm to 720 mm in comparison with the AZ 960.  The new BA 720 also provides the facility for fitting fixed flails and therefore for producing woodchippings. To do this, the machine is fitted with the so-called "Twin Gear". This allows the speed to be reduced from 1000 revolutions per minute for waste fragmentisation down to 500 rpm for woodchippings production. Eiler GmbH will be relying on this range of variations, because the demand for woodchippings has now grown so much that alternatives to standing timber are necessary. The BA 720 has been designed so that it can be towed like a trailer at up to 80 km/h behind an HGV, and so that it can be loaded using the HGV loading crane. The new JENZ machine is driven by a six-cylinder motor with 490 hp, and therefore has all the characteristics that the company knows and requires. Information: www.eiler-holztrans.at