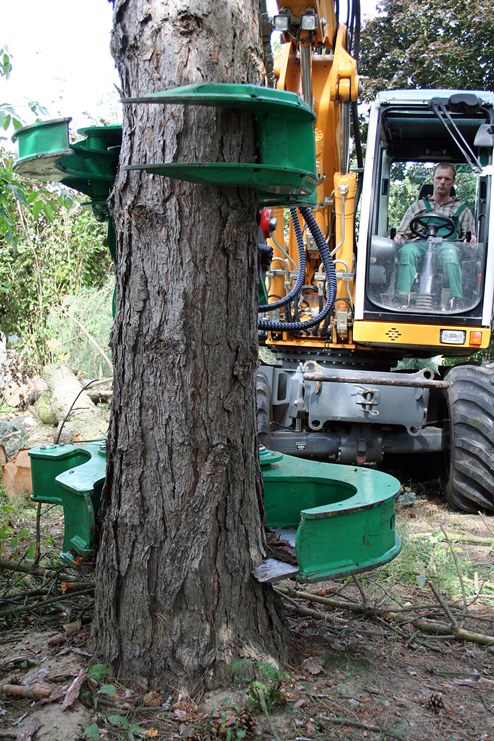 Just snip it off instead of sawing it

Chainsaws, and also felling units with a circular saw cutter, quickly become blunt if they come into contact with soil due to their high speed. A "slow" cutting cutter, in contrast, lasts much longer - which is exactly what the C-series JENZ Woodcrackers do. The highly-efficient cutting head for harvesting whole trees and bushes is an individual add-on unit, mostly for hydraulic diggers.

Whether it's being used for conventional tree and bush harvesting, rapid-growing plantations, at the edge of woodland, in a corner, on the road, off-road, on sloping areas, in swamps etc., the various sizes of the Woodcracker C have been successfully used for trees of up to 55 cm trunk diameter. The best thing about it is the low-wear method of operation, and the heavy duty cutting equipment which allows extremely simple replacement of the cutter if this becomes necessary after many many cuts. Additions such as the Multigrip controller and Autospeed valve increase the harvest yield and simplify operation considerably. The gripper and the additional collecting function enable targeted and clean placement of the harvested timber. On top of this the clean cut surface, which ensures that the trunk is not crushed in the cutting area, is very important.

By now, many horticultural operations have bought a C-series JENZ Woodcracker so that they can carry out forestry work in gardens and parks using small and medium-size diggers, and also to surgically remove individual branches from trees which, for example, are hanging over the neighbour's fence. The trees or branches are simply held solidly by the gripper and then put down in a controlled manner so that there is no damage to the neighbours fence or the owner's garden hut. The machines sold clearly show a tendency towards mechanical processing of trees in comparison with manual. Apart from this, working in a heated digger cabin is much more comfortable, less arduous and considerably less dangerous. Uwe Drinkuth has already got his second C-series Woodcracker attached to a 14 t wheeled digger, and a 16 ton digger with caterpillar tracks. The felling digger is most often used caring for trees alongside roads or railways.

Mr Drinkuth, who comes from Bückeburg, trained as a mechanical engineer at JENZ at the beginning of the 1990s, and worked as a service fitter until 1997. Parallel to his job with JENZ Mr Drinkuth, who is now 47, operates a 100 hectare arable farm (grain, oilseed rape, maize) in Bückeburg and is studying to be a qualified mechanical engineer so that he can work as a self-employed fitter or, as he himself puts it, an "independent artist", initially for his old employer. This does not appear to be enough for Mr Drinkuth, so at the same time he founded a company for tree felling, clearing and shredder work. One of his six employees is responsible for operating the arable farm.

The lifting shear R 900 Woodcracker has established itself for the harvest work, in other words clearing and pre-splitting roots. This means that the roots are prepared and freed of minerals so that they can be fed into the JENZ biomass processor. Less earth and sand mean a considerable reduction in wear during further chipping. The product has clean cut surfaces and looks like coarse woodchippings. It is actually possible to produce pure G 100 quality in one working cycle. Heating plants really like to take on this material, because there is real energy contained in the root wood. After all, it was once a foundation for the tree.

This sustainability is very important to Uwe Drinkuth, which is possibly why he and JENZ work so well together. "We are not really interested in classical dumping. The entire garden waste wood will be put to use ecologically" said Mr Drinkuth. "First, the garden waste is put in an intermediate store on our premises. The first working operation is then fragmentising with the help of our JENZ shredder. After this, the fragmentised material is stored in a heap and heats up all by itself. This heating helps "hygienisation". The process means that any weed seeds present are thermally destroyed. The next working operation is then sieving. In this case, coarse and fine materials in the shredded material are separated. The course material is then thermally used in power stations which only generate power using renewable raw materials. The fines content is used for the arable farm operations as a humus fertiliser. The result is that around 25 t of potassium and phosphor for fertilisers, and around 30,000 l of crude oil for nitrogen production, does not have to be extracted from the earth for our farm operations. That's what we call sustainability."

Just snip it off instead of sawing it »
24 hours a day, seven days a week »
Three into one! »
In the fast lane »
Same width, a little higher and more power »
JENZ technology is also used for successful production in the Czech Republic Drevotrans from Pilsen is currently JENZ's biggest customer »
NZ 1600 E Firma Geosol LTD »
pre
All customer statements
next