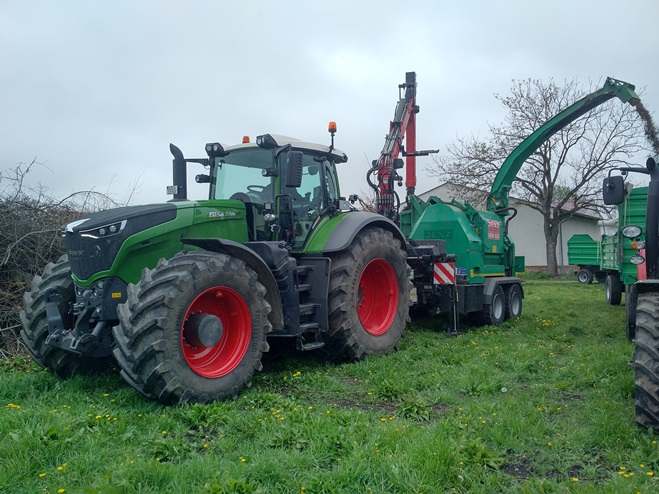 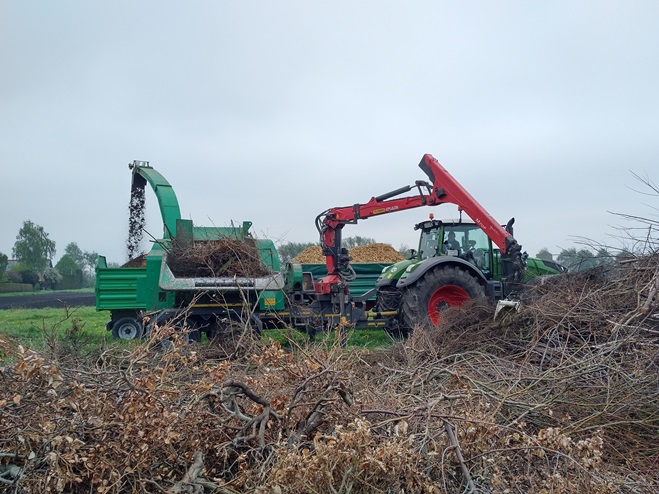 Aindling-Hausen (jkr). This is a combination you just have to see: the most powerful Fendt working together with the biggest JENZ-power takeoff shaft chipper. And the master of this powerful technology is Josef Sturm, businessman from Bavarian Hausen, a village in the community of Aindling in the rural district of Aichach Friedberg.

The Fendt Vario 1050 is currently the largest series tractor available with its 380 KW (517 hp). The 52-year-old says he had to wait almost 2 years before he received his new tractor, which at that time was the "most-viewed machine" at the Agritechnica according to the manufacturer. The HEM 820 Z, which is the largest power takeoff-driven mobile chipper made by JENZ, was already available on the market. Josef Sturm received his first coarse chipper from the series in 2012, and replaced it with a new model in 2016. The machine chips shrubs and standing timber of a diameter up to 80 cm and is designed for large tractors with a power of between 150 kW (200 hp) and 400 kW (540 hp).

In other words it's just right for the largest and most powerful tractor which Fendt ever built. The actual technical specifications which Josef Sturm has measured in practice with his new combination fit the picture. "The capacity is gigantic. We drive the woodchippings away in three sliding floor trailers. At its peak it manages 45 bulk cubic metres every quarter of an hour. That means around 1000 bulk cubic metres of forest woodchippings every day, if it comes from standing timber it sometimes even reaches 2000 bulk cubic metres. For private households we chip using a size 38 screen basket and produce 130 bulk cubic metres per hour" said the businessman. Despite the increased performance, the diesel consumption has been reduced from 4.4 litres per thousand bulk cubic metres down to exactly 4.0 litres.

He drives the combination himself. "I manage that really easily. I'm completely satisfied with JENZ machines, and I have never regretted deciding to buy JENZ. Even if I do get lots of offers I'll be sticking to my mobile equipment. I can reach any workplace at any time of the day - and I can get out of any field again as well" said Josef Sturm, laughing. The trained farmer started 18 years ago by logging in the forest. "Basically, Gerald Seidel gave me the idea to start woodchipping" said Mr Sturm with hindsight, and added: "I made the decision two or three weeks later and then started working in the woodchipping business." At the time he invested about €300,000 in a Fendt 930 tractor and a power takeoff shaft-driven JENZ HEM 540 Z mobile chipper. In 2008 he got a JENZ HEM 581 Z, and he bought the largest JENZ HEM 820 Z mobile chipper in 2012 and again in 2016.

His first customers were private households, but he also had enquiries from the Botanical Gardens in Augsburg at the time. "On top of this I was extremely active myself, I drove around a lot and managed to acquire a lot of orders" said Mr Sturm. He worked for a total of 150 hours on the chipper in the first year. Nowadays it's more like 1000 hours of chipping every year and then 2000 hours of tractor driving. According to Mr Sturm "It gets more and more all the time". His customers, who are spread over a radius of 150 km, still include many private households but also the Augsburg and Aichach Forestry Associations.

Josef Sturm has a permanently employed HGV driver and an office worker on an hourly basis. On top of this he's helped by his mother whose farm, where his works premises are now located, he moved to when he was four years old. "At the time we converted the pigsties to a workshop, and the large hall where we used to store the grain is where the machines are now kept" he explained. Mr Sturm no longer actually farms himself. "We've leased out our 30 hectares."